House of Hospitality for Undocumented Immigrants

After more than a year of searching, a dream appears to be coming true for members of the Viatorian Community (www.viatorians.com): Their vision of opening a house of hospitality for undocumented immigrants is becoming a reality.

Work is underway at a former convent at St. Mary of Czestochowa’s Parish in Chicago’s 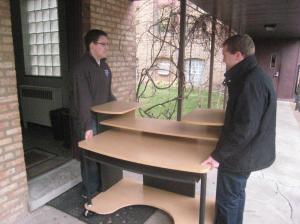 west suburbs, converting it into the Marie Joseph House of Hospitality. Members of the Interfaith Community for Detained Immigrants — of which the Viatorian Community is a founding member — couldn’t be happier.

They moved ahead in December, once they learned that the Archdiocese of Chicago, which still owns the convent, accepted bids from contractors needed to  bring the building up to code. Once they gain occupancy permits from the town of Cicero, they can begin offering hospitality to undocumented immigrants who have been released from the U. S. Department of Immigrant and Customs Enforcements facilities.

“Ideally, we hope to be in by the end of February,” says Br. Michael Gosch, CSV, one of the home’s driving forces, “but a lot of work needs to be done. It hasn’t been lived in, in five years, so it needs fresh paint, cleaned carpets and furniture.”

Youth volunteers from Cristo Rey St. Martin College Prep and Saint Viator high schools, as well as the Children of Abraham organization and the Walter Payton Charter School, all are planning to meet at the house on Feb. 2 to help prep the walls for painting.

It’s a big job. The former three-story convent contains 18 bedrooms, with additional rooms that the group hopes to convert into space for families. Financial support is pouring in from interfaith congregations across the Chicago area. They realize the need for such a center is vital. Already, members of the Interfaith Community are providing accompaniment to seven immigrants, including two from China, one from Somalia, Rwanda, Colombia, Iran and Nigeria, who were released from detention — with no money, no command of the English language and literally nowhere else to go.